The Hunt finally hits theaters after being pulled from its original release date last September. The mass shootings in El Paso and Dayton understandably made Universal Pictures hesitant to release an unapologetically violent movie about people hunting other people. It didn't help that Donald Trump, feeding on a wave of angry stories in conservative media, slammed the film on Twitter as having been made “to inflame and cause chaos.” This is an example of why no one should ever judge a movie without actually having seen it first. The Hunt is not an anti-conservative picture. It mocks everyone equally – Left and Right, conservative and progressive. And the heroine is someone whose political leanings are ambiguous.

Best of all, this dark satirical comedy argues that the divisiveness so prevalent in our country right now is destructive for all of us.

Without revealing any major spoilers, here's what you need to know. A group of “deplorables” – an obsessed gun nut, a guy who kills endangered animals for sport, a xenophobe, etc. -- are drugged and dropped off in a field, where a group of liberal “elites” hunt them for sport. (This is where conservative media confusion set in.) One of them, Crystal (Betty Gilpin), manages to escape the confined area where the hunt takes place. She sets off to find the people responsible.

If those conservative victims are portrayed as broad stereotypes, so are the liberals behind the scheme. Crystal encounters several of them. They're all politically correct types, language police, or excessively “woke.” (In a fine example of the film's humor, one of them exclaims “For the record, climate change is real, asshole!” before shooting a dude in the face.) Hillary Swank plays Athena, the woman at the center of the whole shebang, which originates from a Pizzagate-like online conspiracy theory.

Everything in The Hunt is deliberately exaggerated. The movie presents its characters the way we see each other – not as fellow Americans, but as ideological enemies deserving of scorn. We watch them interact and realize, of course, that this is only leading to increasingly bad things. That idea culminates with an extended scene between Crystal and Athena in the final fifteen minutes that aims to highlight the futility of such dehumanization. It's a stunning finale.

I've described the plot in a straightforward manner. In reality, one of the most interesting – and, for some viewers, potentially the most frustrating – factors of The Hunt is that it reinvents itself a couple times. The film starts out seeming as though it's going to be entirely about the titular event. Then, around the halfway mark, it switches course, coming at the premise from a different angle. A while after that comes the Crystal/Athena showdown, which shifts course slightly once again. Taking that approach could have made the film seem disjointed; however, director Craig Zobel and screenwriters Nick Cuse and Damon Lindelof use it to deepen our understanding of their themes. Each “section” provides more clarity about what the story is getting at.

The cast – which includes Emma Roberts, Ethan Supplee, Ike Barinholtz, and Amy Madigan – does a uniformly good job of bringing Left and Right stereotypes to life. Gilpin and Swank are the scene-stealers, though. The former is hilarious as a tough-talking, no-nonsense Afghanistan vet whose only definable political view seems to be “don't mess with me.” The latter gives Athena a perfect combination of iciness and self-righteousness.

At only 85 minutes without end credits, The Hunt sometimes feels as though it's rushing through its scenarios. And while the jokes are often funny, they rarely go too far beyond the surface. Nevertheless, the movie is undeniably provocative. An atmosphere of hatred is pervasive between conservatives and liberals in the United States these days. The Hunt imagines that philosophical hated manifesting itself literally. Sadly and pointedly, the thought doesn't seem completely far-fetched.

The Hunt is rated R for strong bloody violence, and language throughout. The running time is 1 hour and 29 minutes. 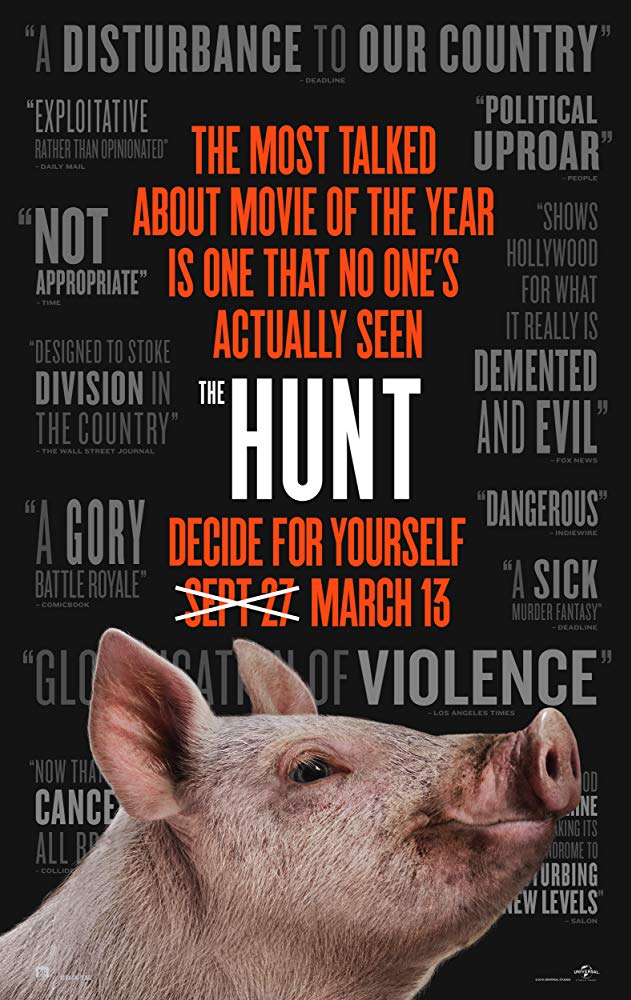