Leonard (Mark Rylance) is a low-key man who runs a tailor shop in 1950s Chicago. Actually, he bristles at being called a tailor, proudly brandishing his beloved scissors to remind people that he's a “cutter.” After all, if the cut of the material isn't right, nothing else will be, either. The lead character of The Outfit, Leonard takes great pride in his work, focusing on perfection in the bespoke suits he makes, except for one intentional bad stitch on the inside, just to remind his customers that their purchase was hand-made. Working alongside him is his trusted receptionist Mable (Zoey Deutch).

In the back of Leonard's shop is a drop box that the local mob uses to pass correspondence and packages back and forth. He doesn't inquire about what's in there, and we assume that this arrangement has been made so that they'll leave his business alone. Staying out of it becomes impossible when hotshot young gangster Richie Boyle (Dylan O'Brien) and associate Francis (Johnny Flynn) come in one night. Richie's been shot, and Francis wants Leonard to stitch him up. They subsequently drag the unwitting cutter into a mess involving a rival gang, the quest for an incriminating audio cassette, and “the Outfit,” a national crime organization that's looking to bring the Boyles into the fold. The only way for Leonard to get out of this unscathed is to somehow outwit Francis, Richie, and his father, kingpin Roy Boyle (Simon Russell Beale).

The Outfit takes place entirely in Leonard's shop over the course of one night. Rather than feeling stagey or claustrophobic, the approach works because the movie has an ingenious ticking-clock plot. One complication after another presents itself, meaning that Leonard has to quickly process them and choose a course of action, all while making the mobsters think he's being neutral. Great suspense is generated from the notion that keeping his composure in increasingly dire circumstances is the only thing that will keep him alive. If he ever tips his hand, the Boyles won't hesitate to kill him.

To specifically reveal anything that happens would be to take away some of the film's impact. What's important to know is that The Outfit is very much about a quiet man playing mental chess with several very dangerous individuals. The screenplay by Johnathan McClain and director Graham Moore is tightly calibrated, expertly ratcheting up the tension. Each new development feels plausible and adds gripping complexity to the scenario. Best of all, we know Leonard is taking everything in, yet we don't know what his endgame is until he reveals all his cards. That ensures the movie's finale pays off nicely.

Mark Rylance won an Oscar for Bridge of Spies. His performance in The Outfit is every bit as good. The actor has a tough challenge. He has to show us the wheels turning inside Leonard's head, even as he maintains an outward passivity. Rylance accomplishes this with extraordinary skill. Beyond that, he conveys the pride with which his character works. Leonard is a man for whom precision is essential. The detail and focus he puts into making suits ends up working well for him when facing off against the mobsters. That idea – that a guy's professional ethic would come in handy during a life-or-death ordeal – lies at the film's heart. It works because Rylance makes it come alive.

Everyone else in the cast is great, too. Deutch beautifully captures Mable's free-spirited, “I want a better life for myself” attitude; O'Brien is excellent as the cocky mobster who feels a weird affection for Leonard; Beale is terrifying in his scenes as the big boss; and Flynn blows the roof off the place as the lieutenant whose ambition to rise in the ranks is equaled by his unpredictable volatility. Magnificently acted and packed with twists and turns, The Outfit is a first-rate adult drama that holds you in its grasp from start to finish.

The Outfit is rated R for some bloody violence, and language throughout. The running time is 1 hour and 45 minutes. 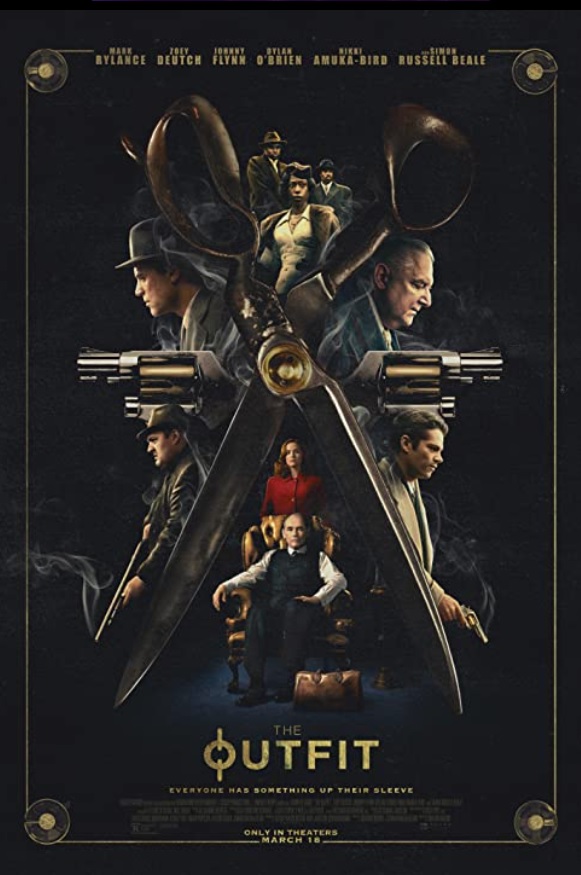