Once Upon a Time...in Hollywood

Once Upon a Time...in Hollywood is Quentin Tarantino's most self-indulgent film. In this case, though, self-indulgence is not a bad thing. As the first four words of the title imply, it's a fairy tale, one packed with his particular obsessions: genre movies, old pop songs, cinemas, violence, and yes, women's feet. (There are a whole lot of feet in this picture.) Consequently, it has a personal feel that we haven't really seen in a Tarantino flick since Jackie Brown. This isn't an electrifying work like Pulp Fiction, although it hits you on a more intimate level.

Leonardo DiCaprio portrays Rick Dalton, the former star of a hit television Western whose career is on a downward trajectory, thanks to his alcohol problem. Brad Pitt plays Cliff Booth, Rick's longtime stunt double and personal handler. Hollywood is being slightly cruel to Rick. He isn't getting the quality of roles he once had, and a producer (Al Pacino) is trying to convince him to star in some cheesy Italian “spaghetti Westerns.” The state of his career is grim.

There is not much plot in Once Upon a Time...in Hollywood, there's a vibe. Here's what it amounts to: Rick tries to figure out what direction he can/should take if he wants to continue working; Cliff enjoys the benefits of being associated with a star, even if he's more of a lackey than anything; Rick's next-door neighbor, Sharon Tate (Margot Robbie), sees her star rise; and the followers of Charles Manson poke around the fringes.

After its premiere at Cannes, the film sparked some debate over the fact that Sharon is a prominent figure who nevertheless gets very few lines. The character is here to serve as an ideal, though. She's on her way up, while Rick is on his way down. She's glamorous, Rick is worn and haggard. Sharon represents what he had and lost, what other actors have that he wants to seize again. Using the real-life actress in this way is appropriate for the film, especially when Once Upon a Time...in Hollywood gets to its finale.

Tarantino is interested in transporting the audience back to 1969. There are long scenes designed to let you soak up the ambiance. At one point, Sharon ventures into a theater to see one of her own films. We view her in her seat watching almost an entire trailer for another picture. Multiple times, there are lengthy sequences in which characters drive, vintage radio ads blasting from their car radios. Shots of Hollywood landmarks (restaurants, bars, cinemas, etc.) abound.

Once Upon a Time...in Hollywood also puts you on the set with Rick and Cliff, via dialogue-heavy scenes carefully crafted to reveal their individual psychologies. The best of them finds nothing-to-lose Cliff picking a fight with veteran martial arts star Bruce Lee. What Tarantino is doing here is laying groundwork that will pay off in the story's conclusion. It becomes apparent that Rick knows he's on his way out, Cliff realizes that this doesn't have great implications for him, and Hollywood continues a long-standing tradition of making and breaking dreams.

All the performances are superb. DiCaprio nicely captures Rick's professional frustration with himself. He puts a comedic spin on the role that's fun to witness. Pitt, looking a bit like Robert Redford, effectively represents world-weariness. In his hands, Cliff exudes a frequently hilarious been-there-done-that attitude. Robbie does tons with few words, conveying Sharon's excitement about where her career is headed. Even the smaller roles are beautifully cast, from Kurt Russell playing a stunt coordinator to Dakota Fanning embodying Squeaky Fromme.

It's impossible to talk about Once Upon a Time...in Hollywood's full intentions without giving one key element away. Here's your SPOILER ALERT. Don't read any further until you've seen the film. Stop right now.

As he did with Inglourious Basterds, Tarantino re-writes history. Manson's minions do not murder Sharon Tate. As Once Upon a Time...in Hollywood ends, you ponder what the director is getting at. Doubtlessly, many fascinating theories will be floated. It seems to me that, in keeping with the fairy tale theme, the movie is suggesting a sea change happened in Hollywood with Tate's murder. To some degree, a sense of innocence, both onscreen and off, was lost when Manson and his "family" went on their killing spree. Goofy pictures like The Wrecking Crew (the one Sharon goes to see herself in) yielded to the darker, cynical fare of the early- to mid-1970s. The film asks us to consider how cinema might have been different had the cult not shaken Hollywood to its core.

Once Upon a Time...in Hollywood is Tarantino's love letter to what show biz used to be. He celebrates it and eulogizes it simultaneously, in a film that eschews his usual heavily-stylized razzle-dazzle in favor of something surprisingly heartfelt.

Once Upon a Time...in Hollywood is rated R for language throughout, some strong graphic violence, drug use, and sexual references. The running time is 2 hours and 41 minutes. 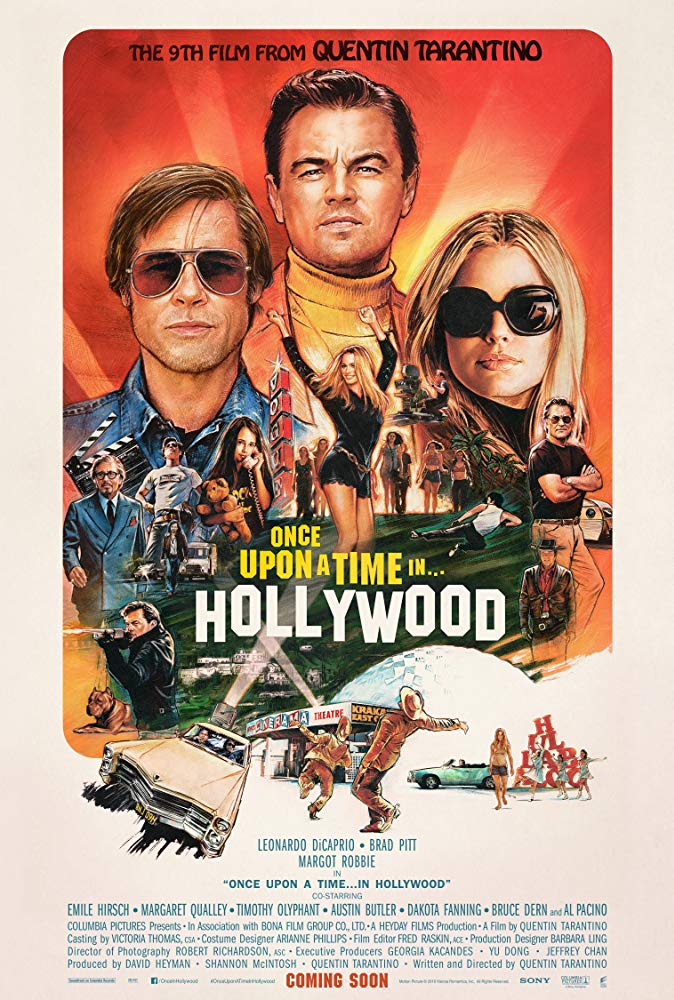