I did not think the world needed another version of Little Women. I was wrong. There have been many previous screen adaptations of Louisa May Alcott's beloved novel, including the 1949 June Allyson/Elizabeth Taylor version and the 1994 Winona Ryder/Kirsten Dunst version. There was even a version as recently as last year. Despite them all, writer/director Greta Gerwig (Lady Bird) puts her own stamp on the material, creating a film that will speak strongly to a new generation.

This is, of course, the story of the March sisters: Jo (Saoirse Ronan), Amy (Florence Pugh), Meg (Emma Watson), and Beth (Eliza Scanlen). They live with their mother Marmee (Laura Dern) in relative poverty while their father is off at war. Jo is an aspiring writer who attracts the notice of neighbor Theodore “Laurie” Laurence (Timothee Chalamet), creating some jealousy on Amy's part, as she has eyes for her sister's would-be suitor. But you already know all this and more, so no need to elaborate further.

One of the best things about Little Women is that Gerwig gives it a contemporary feel, despite the period setting. The pitfall in movies like this is having them seem as though the themes aren't particularly relevant to the here and now. Through smart, incisive dialogue, she avoids that sort of antiquated vibe. Yes, it takes place in the 1860s, yet the characters are very relatable to modern audiences because they don't approach the events of their lives with an old-fashioned perspective. Nothing ever betrays the time period; it's more that Gerwig takes care to emphasize the universality of what the various March sisters go through.

The filmmaker additionally finds parallels to present day. As just one example, Jo's efforts to impress a publisher echo what women go through in Hollywood. She's told that, if her story has a female lead, that person must be married off by the end. Of course, Jo isn't interested in delivering stereotypes, she wants to reflect her own reality. Near the end, she gives that publisher a speech on art that speaks volumes to what Gerwig and other female directors certainly contend with. Fair pay and the need to fight for opportunities men would just be handed also come into play.

Then there are the performances, which are impeccable. Saoirse Ronan makes a great Jo. Throughout her career, the actress has excelled at projecting a combination of toughness and vulnerability. She uses that well here, conveying how everything happening in Jo's life swirls together into what will become her breakout work. Meryl Streep steals a few scenes as the haughty Aunt March, and Timothee Chalamet is terrific at showing how Laurie's playful side and immature side mix.

The true standout is Florence Pugh. What a year she's had. After stellar work in Fighting with My Family and Midsommar, she turns in a third commanding performance as Amy. Pugh ensures that Amy's one-sided rivalry with Jo reverberates, thanks to the depth of emotion she brings to it. Every line of dialogue is perfectly delivered, every look full of feeling. No young actress is more exciting to watch right now.

Little Women benefits further from gorgeous production design, lush cinematography, and intermittent bursts of humor. The movie puts you into this setting, among these people, and allows you to savor your time there. Greta Gerwig isn't just taking Louisa May Alcott's work and transferring it to the screen. She clearly relates to the material and takes significant meaning from it. As such, audiences will too. Little Women tells a familiar story in a way that allows you to experience it from a fresh point of view.

Little Women is rated PG for thematic elements and brief smoking. The running time is 2 hours and 14 minutes. 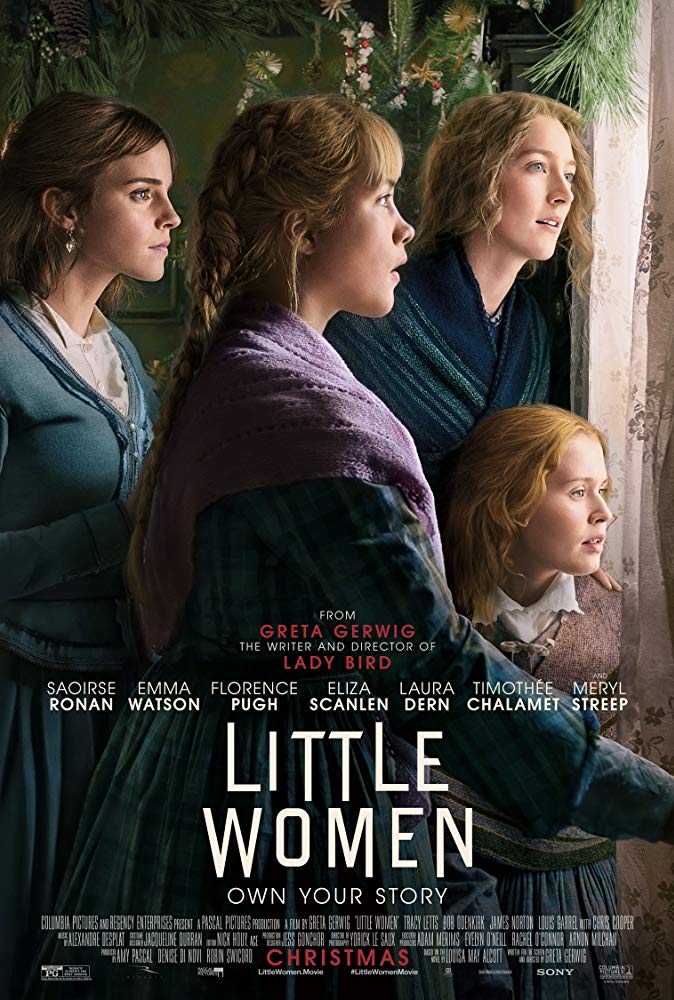