Hatching reminds me of the '80s horror movies I love so much. That decade marked a period where filmmakers weren't afraid to come up with big, crazy ideas. A Nightmare on Elm Street, The Return of the Living Dead, Night of the Demons, They Live, Lifeforce – these are just a few examples. These days, Hollywood cranks out a lot of carbon copy paranormal chillers. The indie scene is far better, often delivering dark and disturbing films that use the genre to touch on more substantive themes. Still, we need to look to Finland to find one that induces squirms via sheer outrageousness.

Tinja (Siiri Solalinna) is a 12-year-old gymnast. She constantly tries to please her mother (Sophia Heikkilä), a social media star who sells the illusion of family perfection and is not pleased by anything less. Even practicing on the high bars until her hands bleed is not enough for Tinja to win approval. After a bird crashes into the window of the family home, the girl becomes curious enough to wander out into the woods. She finds a mysterious egg there, one she brings home, hides inside a teddy bear, and nurtures. Eventually it hatches, revealing a bizarre-looking creature inside. Is it a bird? Sort of, but not entirely. Maybe “avian hell-beast” would best describe the thing.

I hesitate to say much more about Hatching's plot. Of course, the whatever-it-is begins to grow. That's safe to say. And, this being a horror movie, you might correctly surmise that the creature doesn't take kindly to anyone who hurts Tinja or upsets her in some way. Birds go through a process called “imprinting” – the formation of a strong attachment to a parent that results in them learning all the stuff they need to survive. In the absence of other birds, they can imprint on a human being. This movie takes the entire concept of imprinting to extreme levels, as the bird-thing imprints on Tinja, to eerie effect.

Hatching is everything you would want a picture like this to be. It's gross. It's creepy. It's darkly funny at times. The visual effects used to bring the bird-creature to life are impressive. Gory scenes deliver a shock. Where the story goes in its third act takes what you've already seen and spins it off into a direction so fundamentally out-there that it's impossible to not be impressed by the sheer gutsiness of it. Director Hanna Bergholm pushes the film's premise as far as it will go.

Beyond the horror craziness, Hatching benefits from a human story. We feel empathy toward Tinja, a child who just wants to be accepted by her family and especially by her mother. In her bird-like companion, she finds someone to take her side. That comes with a cost, yet it also helps her develop a little inner strength. If anything, the film would have benefitted from increased development of her father and brother, as well as some additional background about how the family dysfunction began. What's here works in telling Tinja's story, it just could have taken her dilemma another step or two further, for maximum impact.

Hatching offers sufficient entertainment for viewers looking for a wild, twisted movie. Creature features have been around forever, but this one finds a fresh angle via its uniquely oddball concept. The film isn't afraid to venture into unhinged territory. That guarantees it will be one of the horror highlights of the year.

Hatching is unrated, but contains bloody violence and adult language. The running time is 1 hour and 26 minutes. 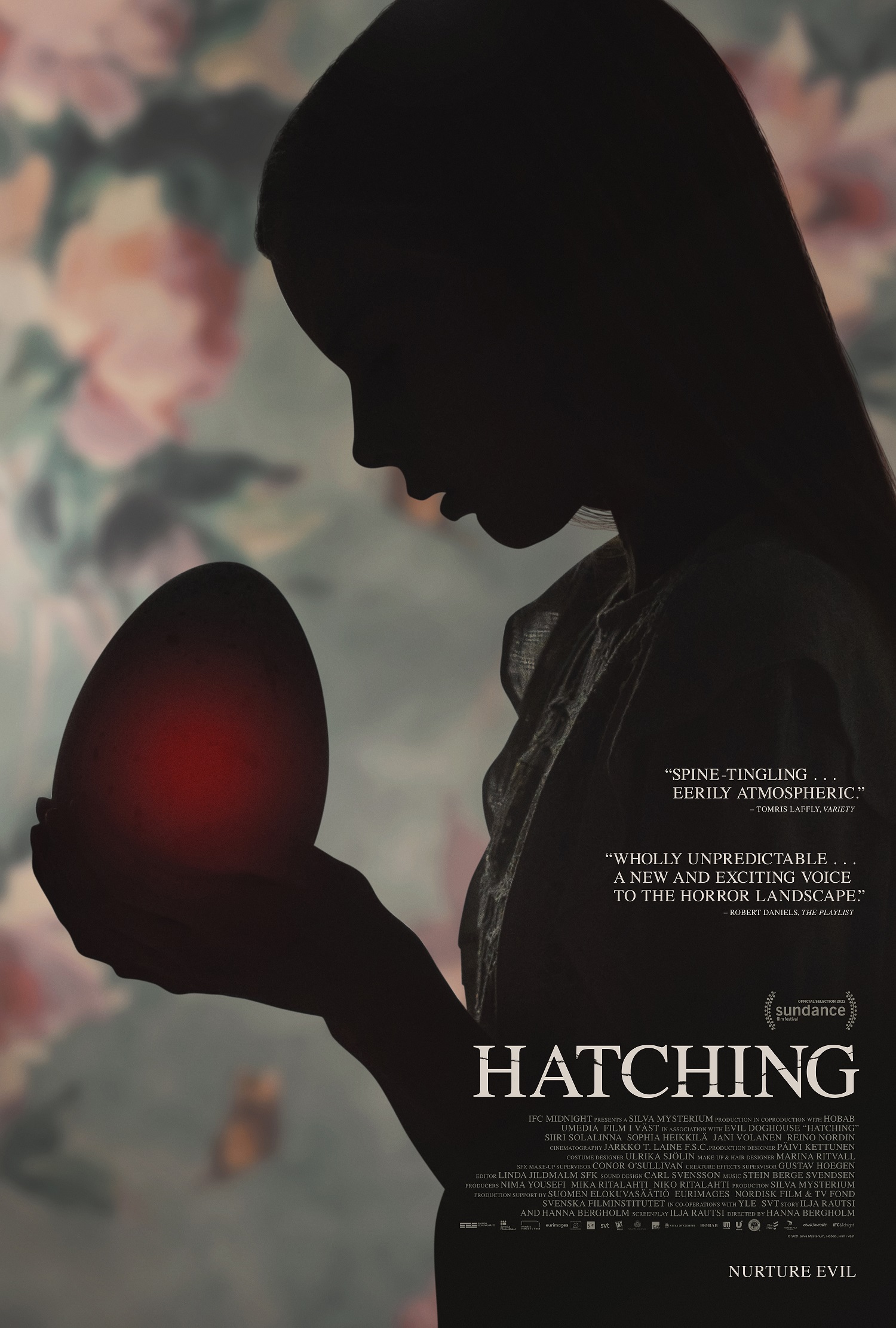