Hard Luck Love Song is one of those rare movies to be based on thin source material. In this case, it's a song by singer-songwriter Todd Snider called “Just Like Old Times.” The tune, which plays over the end credits, is a descriptive and sometimes darkly humorous tale of a perpetual screw-up typically screwing up. Director/co-writer Justin Corsbie fleshes it out nicely for a while, only to lose control at the end.

Michael Dorman (The Invisible Man) stars as Jesse, a substance-abusing troubadour. He pulls into a Texas town and rents a room at a dingy motel. After finding a pool hall, he hustles a scary local named Rollo (the excellent Dermot Mulroney). This will later prove an unwise choice. With a little money in his pocket, several bottles of booze, and a small packet of cocaine, he calls former girlfriend Carla (Sophia Bush) over for a visit. She, perhaps a little too obviously given the plot's milieu, works as a prostitute. Inside the room, the two sort through their past issues while getting wasted and fantasizing about making a better life together.

That's the first 75 minutes of Hard Luck Love Song, and they're pretty good minutes. Dorman is outstanding, perfectly capturing how Jesse is his own worst enemy. He's smooth and charming, but that props up a penchant for self-destructive behavior. The portrait of a talented musician who has repeatedly gotten in his own way – and shows no true signs of doing otherwise in the future – is powerful. Sophia Bush is equally good as Carla. Her character has been down this road with Jesse before, so she knows where things are likely headed, even as she allows him to gaslight her. The two leads have really dynamic scenes together, with Jesse and Carla engaging in a shared delusion that they're in healthier, more productive places in life.

Corsbie shows a knack for creating ambiance. You can practically smell the combination of beer and cigarette smoke in the bars that feature prominently in the plot, and the motel feels like the dead end it is. His staging of the Jesse/Rollo pool game is also masterful, using unbroken shots to create tension. Hard Luck Love Song paints a vivid portrait of a run-down town and the people who inhabit it.

After all this strong material, the film falls apart badly in its final half-hour. It begins by introducing a couple characters, played by Eric Roberts and Melora Walters, who come out of nowhere and have no real relevance to the plot. RZA appears, too, as someone with a connection to Carla that I won't spoil. What happens here is that Hard Luck Love Song can't figure out how to wrap up the story. To compensate, it resorts to overwrought melodrama that shatters the carefully-set mood of everything that came before. Worse, the picture relies on not one, but two preposterous deus ex machinas to get where it wants to go, then ends with a completely ridiculous last scene that tries to put fake happiness on a grim story.

It's a shame that the third act goes off the rails, because this is quite a solid movie before that. But the fact remains that when an ending flops hard, you walk away feeling disappointed. Hard Luck Love Song has its share of positive qualities. It just collapses at the exact point where it should be delivering an emotional punch.

Hard Luck Love Song is rated R for language throughout, drug use, some violence and sexual references. The running time is 1 hour and 44 minutes. 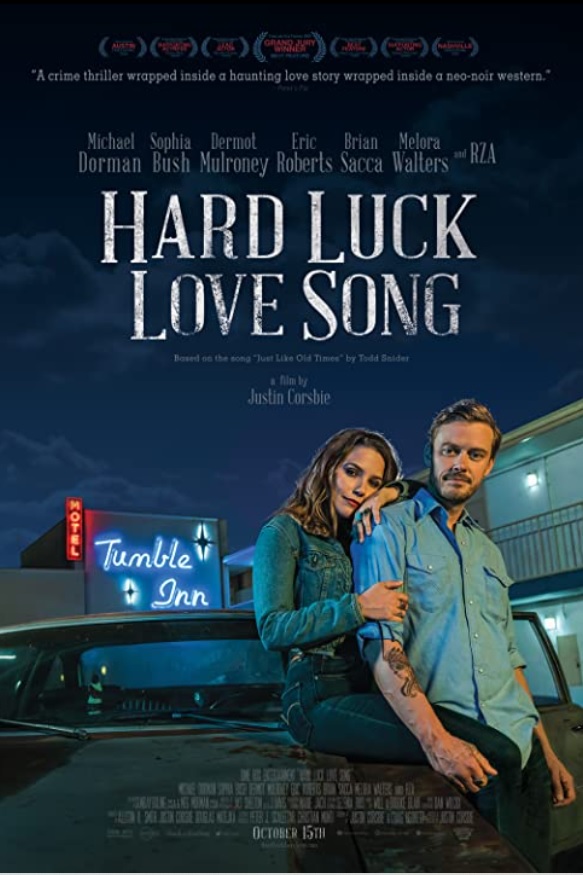