For various reasons – namely its increasing prevalence in society– we've been hearing about toxic masculinity more and more in the last few years. The Art of Self-Defense, which screened at the 2019 Fantasia International Film Festival, looks at the subject from a comedic perspective. Even if it doesn't say anything that Fight Club didn't say twenty years ago, it offers dark laughs, nuanced performances, and a worthwhile perspective.

Jesse Eisenberg plays Casey, a timid office worker who gets mugged while walking back from the store late one night. Afraid and traumatized, he decides to take a karate class run by the enigmatic Sensei (Alessandro Nivola) so that he can learn to defend himself should something of this nature happen again. He's seriously out of place. The other men are all macho, and the sole woman, Anna (Imogen Poots), is good enough to kick some of their asses.

Sensei takes Casey under his wing, making him feel proud to earn his first colored belt. He teaches his protege to face his fears, to confront threats head-on. After initial trepidation, Casey begins responding to these lessons. Soon, he's trying to live life outside the dojo with the same mindset he has inside it.

Writer/director Riley Stearns (Faults) asks viewers to decide for themselves whether or not this is positive. Sure, Casey has more confidence; he's also a lot quicker to resort to confrontation when addressing problems. He becomes, as Sensei advises him, the very thing that intimidates him. The movie asks the question: Has Casey become someone else, or is he still himself behind a tough-guy facade?

The style of comedy in The Art of Self-Defense could accurately be described as stylized. The characters occasionally recite dialogue that is purposefully stilted and talk with clipped speech. The approach heightens everything so it feels just a notch above reality. This is essential to keeping us laughing when the story goes to mildly disturbing places.

Jesse Eisenberg gives a frequently hilarious performance. The actor has always specialized in playing characters who are either geeky or unjustifiably belligerent. In Casey, he gets to combine those types, to great effect. Alessandro Nivola is equally good, guaranteeing that we aren't really sure what to make of Sensei until the very end. At first, he seems full of you-know-what – a guy fabricating a sense of mysticism to impress others. But he is a skilled martial artist, and he does seem to take his own lessons seriously, which could make him a danger.

The third act of The Art of Self-Defense gets slightly bogged down by an improbable plot development that you'll likely guess long before it's revealed. Granted, the film is trying to make a point here. What transpires just seems a little out of place with the overall tone. Fortunately, the film ends in a manner that's both fitting and clever. No beat-you-over-the-head message, only a sincerely-delivered sentiment.

For whatever minor flaws it may possess, The Art of Self-Defense is wickedly funny and undeniably relevant.

The Art of Self-Defense is rated R for violence, sexual content, graphic nudity and language. The running time is 1 hour and 44 minutes. 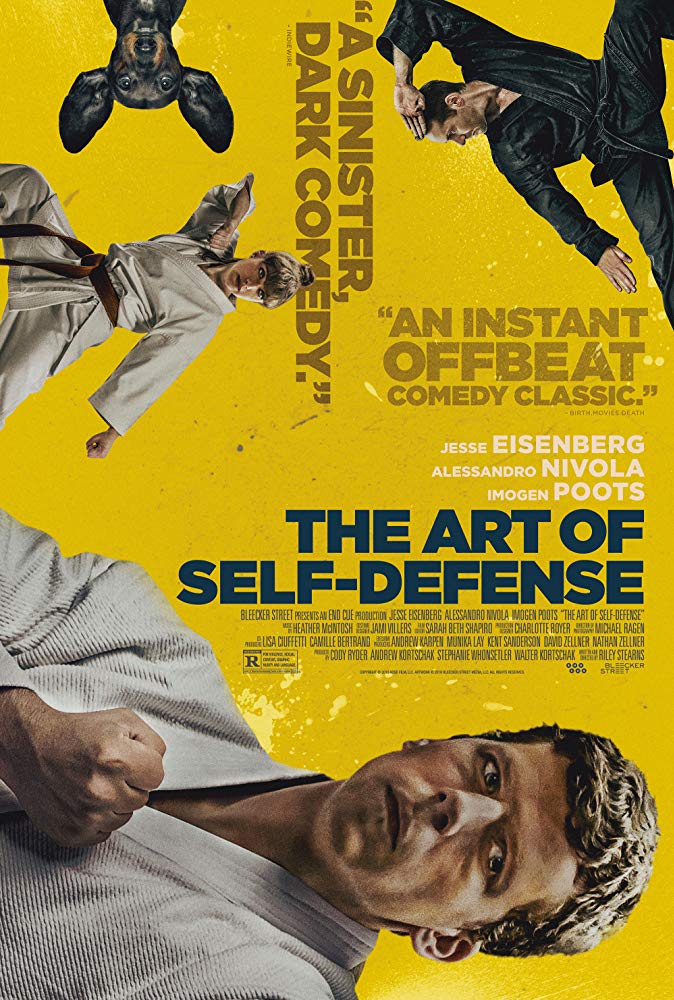